During the Great Depression, some fortune seekers were convinced a “divining rod, a doodlebug, a switch, or a twig” could find oilfields. In the 1950s, others invested in doodlebug technology they were told came from flying saucers. Then as now, any “miraculous machine “could help fleece the gullible.

Not long after December 1931 discovery of the Conroe, Texas, oilfield, a “doodlebug” device swindled Houston oil investors out of $20,000. It also sent Ralph Malone and Vivian Buie to jail in 1935. During their trial in district court, a prosecution witness told of receiving letters describing the doodlebugger as capable of finding oil and natural gas and a field in Polk County.

Malone and Buie claimed their device would find “another field like the Conroe field” worth millions of dollars. They described their doodlebug as “a wonderful instrument that could locate oil pools.” Learn about Conroe’s oilfield in Technology and the “Conroe Crater.”

Despite their defense attornies’ efforts, Malone and Buie (the alleged “brains” of the doodlebug scam), were convicted of mail fraud and sentenced to terms in the federal penitentiary at Leavenworth, Kansas. Then their defense attorneys were indicted as well.

While their former clients headed off to prison, Arthur Heemann and C. Ray Smith hired their own legal council. The new defense team asserted the accused, “merely were attorneys for the swindlers and did not participate in the scheme.”

It did not help that attorney Heemann had been charged five years earlier with the same crime while promoting the similarly fraudulent Oil Investors Company.

Nonetheless, the lawyers got the lawyers off when the judge ruled them not guilty on April 15, 1938. Two months later, Ralph Malone was transported from Leavenworth to a Tucson, Arizona, prison to finish his three-year sentence.

Although Malone was absent from oil stock scams for several years, investors did not abandon their fascination with doodlebugs. The convicted con man resurfaced in the early 1950s when his penchant for mail fraud landed him in trouble with the Securities and Exchange Commission (SEC).

“Often investigation is directed to highly objectionable sales literature which greatly over emphasize the possibilities of success from the proposed security purchase,” the SEC noted in its 17th annual report. “So it was in the case of Oil Prospectors, Inc. and Ralph Malone.”

A year later, the SEC again addressed the issue of doodlebugs, explaining the necessity to resorting to the courts to get compliance with the Securities Act.

“A substantial number of cases requiring injunctive action are those relating to oil and mining promotions,” noted the June 30, 1952, annual report. “The ‘gold brick’ aspect of many of these promotions has by now become quite stereotyped.” The SEC’s complaints seeking injunctions pointed out that, “sellers were omitting to disclose that these individuals had criminal records.”

The commission cited another example of “the almost perennial doodlebug” where the “defendants used in their operations a device called a ‘Magnetic Logger’ and the claims made for its efficacy in discovering oil were the usual ones and were false…There is reason to believe that the injunction obtained by the commission saved the investing public a substantial sum.”

An SEC injunction in 1951 finally brought an end to Oil Prospectors and Ralph Malone disappeared from the news. Doodlebug hoaxes continued.

Most notably, Silas Newton and Leo GeBauer, claimed their doodlebug machine “operated on the same magnetic principles as the flying saucers.” The $800,000 contraption had been developed secretly by the government.

They promoted the tale of a 1948 flying saucer crash site near Aztec, New Mexico, that had yielded 16 humanoid bodies (Roswell’s aliens had reportedly arrived a year earlier).

Although some still maintain an elaborate government cover-up has concealed the real Aztec UFO story, the petroleum exploration technology has received little mention. By 1952, the terrestrial luck of Newton and GeBauer ran out. The Denver Post’s October 14 headline proclaimed, “Saucer Scientist in $50,000 Fraud.” 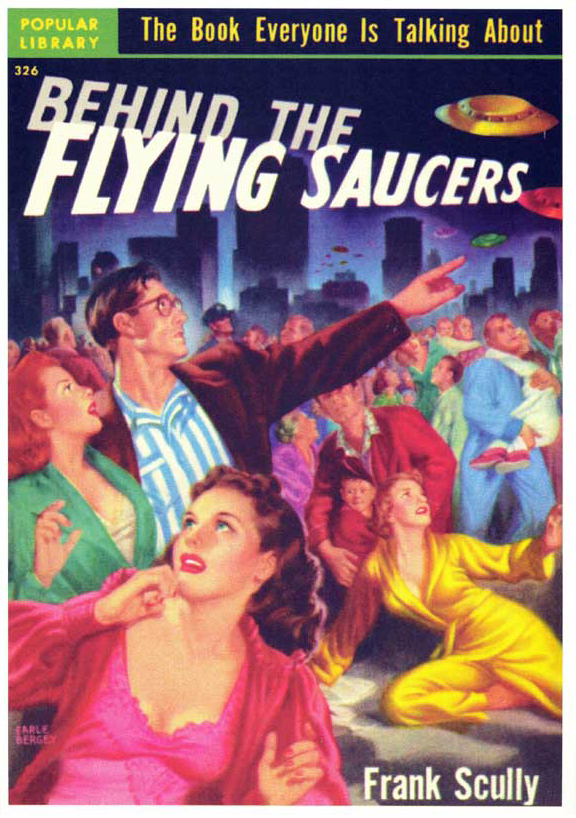 In 1950 Frank Scully had published Behind Flying Saucers, a book reporting crashed UFOs (powered on magnetic principles) and the discovery of dead extraterrestrial beings.

In 1952 and again in 1956, True magazine published articles that exposed doodlebug machine promoters Silas Newton and “Dr. Gee” (identified as Leo GeBauer) as “oil con artists who had hoaxed a gullible Scully,” according to the 1998 book, UFOs & Alien Contact: Two Centuries of Mystery.

It turned out the UFO inspired oil doodlebug was just a box covered in dials and switches made from $3.50 in surplus radio parts. The revelation brought little comfort to swindled investors.

Speculating in oil stocks has been hazardous since the first company incorporated in 1854 in Pennsylvania (see First American Oil Well). As drilling booms moved westward, thousands of exploration companies competed to exploit “black gold.” Most failed after a few expensive dry holes – or without drilling a single well.

Especially during the major oilfield discoveries beginning after World War I and continuing through the Great Depression, the rush to form oil companies led to certificates that looked remarkably alike. Printing boiler-plate stock certificates was not uncommon in the scramble to find investors.

For example, many short-lived companies’ stocks features the same artwork as Oil Prospectors Inc. Here are just a few:

The Society of Exploration Geophysicists (SEG) published its first journal, Geophysics, in 1936. It included articles about the petroleum industry’s three major prospecting methods then used – seismic, gravity, and magnetic. All were based on the scientific method.

The journal’s lead article warned young geophysicists about employing “black magic” or “doodle-bug” methods based on unproven properties of oil, minerals or geological formations. “This is the first time that the term ‘doodle-bug’ was applied to scientific methods, particularly if they had no scientific validity, according to the 1982 book, Geophysics in the Affairs of Men.

“Twenty years later, it was a badge of honor to be known as a doodlebugger, i.e., the field personnel of geophysical crews,” noted the authors Charles C. Bates, T. F. Gaskell and R. B. Rice. “Still later, the term was applied to everyone who worked in exploration geophysics.” A bronze statue, “The Doodlebugger,” welcomes visitors to the Society of Exploration Geophysicists headquarters in Tulsa. The name is a badge of honor for geophysical crews seeking oil.

Editor’s Note – The sculptor of the SEG statue, Jay O´Meilia of Tulsa, Oklahoma, also was the artist who created two “Oil Patch Warrior” statues – one in Ardmore and another across the Atlantic. See Roughnecks of Sherwood Forest.