An 1829 spring-poled well seeking brine found oil instead. Petroleum from Kentucky’s Great American Oil Well would be bottled and sold for medicinal purposes. Also known as the Old American Well, the discovery was among the earliest commercial oil wells in the United States. 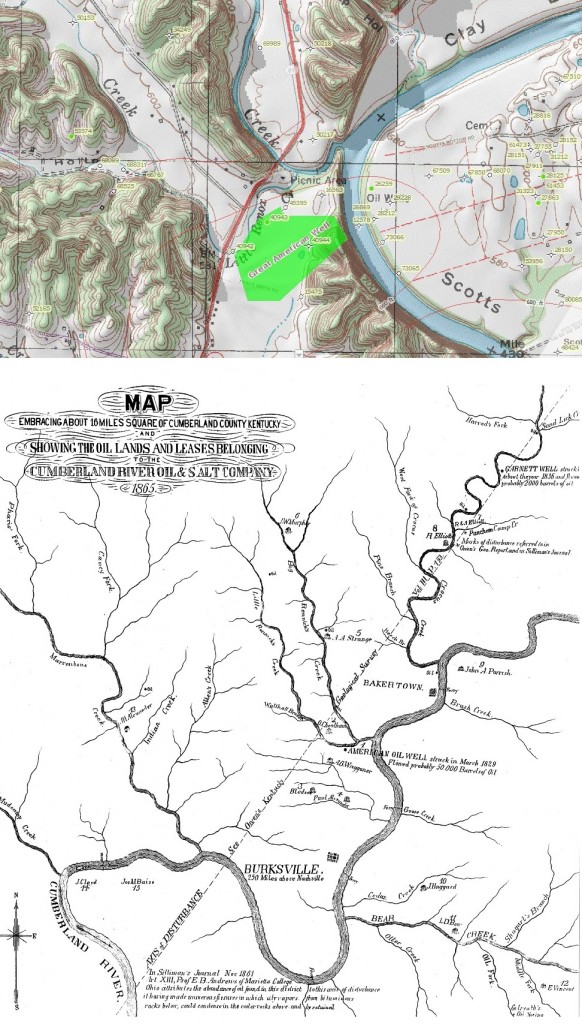 The Kentucky State Geology Survey preserves an 1865 map “embracing about 16 miles square of Cumberland County.” The 1829 well drilled seeking salt water results in the Great American Oil Well, which produces oil that is bottled and sold for “medicinal” purposes.

Boring for salt brine with a simple spring-pole device (used in ancient China) on a farm near Burkesville, Kentucky, drillers found oil instead. They had been working for a local doctor when the March 11, 1829, gusher shot “to the top of the surrounding trees.”

Another Kentucky historian would proclaim the 1829 well as “the first commercially operated oil well in the United States, predating the establishment of the oil industry by some thirty years.”

The Cumberland County well was drilled using “an apparatus consisting of a spring pole made from a strong sapling, set in the crotch of a tree, with a short ‘bit’ fastened to the free end of the pole.”

The driller manipulated this bit by his own foot power – and what a slow task this must have been, according to the Burkesville Riverfront Lodge Motel today located nearby. Its promotions have noted, “The Old Oil Well led the parade in 1829, and so it will continue to mark the spot where the world’s greatest industry was born.”

Pride of Burkesville:  An Oil Gusher

The Great American Oil Well’s historic marker – a large mill stone topped by a bronze tablet – was erected in 1934 by the Kentucky Legislature:

The history and subsequent events of the First Great American Gusher have been kept alive through a few interested citizens who have never, for any length of time, let go this birth of what has come to be a necessary part of the world today. The 50,000 barrel, Old Oil Well, led the parade in 1829 and so it will continue to mark the spot where the world’s greatest industry was born. 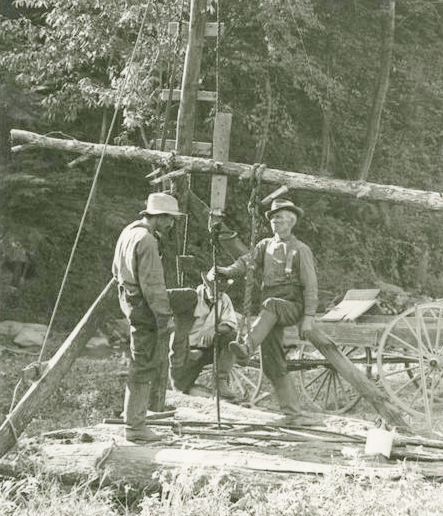 Preceding oil wildcatters, settlers seeking brine drilled with the “spring-pole,” a technology used by the Chinese as early as 450 A.D. Photo from “The World Struggle for Oil,” a 1924 film by the Department of the Interior.

Petroleum drilling, production and control technologies had not been invented. “The salt borers were greatly disappointed,” reported an 1847 account of the discovery. “The well was neglected for several years, until it was discovered that the oil possessed valuable medicinal qualities.”

Petroleum’s uses in medicine, which continues today, began as a cure-all bottled in large quantities and “extensively sold in nearly all the states in the Union.”

The 1810-1960 Burkesville Sesquicentennial booklet cites an August 22, 1919, article from the Burkesville Leader newspaper: The well was a continuing puzzle to the curious travelers who succeeded in winding tortuous journey over bed of the creek…There was a reputation as a cure all which spread around among the various adventurers through the years. The fluid was bottled and sold under the caption of “American Rock Oil.”

The writer knew personally, in later years, one man who vouched for its curative powers for baldness. He stated that when he left the oil field on Saturday night he always took his double handful of crude oil and thoroughly douzed his head in it massaging it into his scalp. When he died at the age of 91 he had a beautiful shock of white hair!

Kentucky today has produced oil and natural gas in 52 counties. Oil production (green) is in the western and south-central areas. Most natural gas (red) is in eastern counties. Cumberland County is on the Tennessee border in the middle of the state.

Some claim Kentucky oil ended up in Pittsburgh, Pennsylvania, in the 1840s, where Samuel Kier sold it as medicine. In the mid-1850s Kier refined Pennsylvania oil into a kerosene lamp fuel, which many continued to call “coal oil.” The historic Kentucky well produced oil until about the Civil War. Salt makers eventually took over the operation of the well, as salt water replaced oil as the well’s primary output.

Records gathered as part of a centennial celebration in 1929 “documenting the first commercially operated oil well in the United States” are preserved at the University of Kentucky Special Collections.

However, another even earlier Kentucky well reportedly drilled for brine and found oil. In 1818, Marcus Huling and Andrew Zimmerman drilled for it on Martin Beaty’s land in what is now the Big South Fork National River and Recreation Area in McCreary County and also found oil that that was bottled and sold for medicinal purposes. “The hole provided very little of the useless stuff, however, and was soon forgotten.” 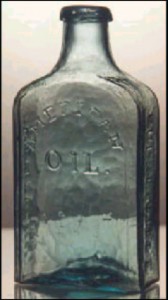 Still earlier, in Noble County, Ohio, drillers seeking brine near Caldwell in 1814 discovered oil – which they soaked up with rags, bottled and sold. The Caldwell chamber of commerce and the Ohio Oil and Gas Energy Education Program (OOGEEP) proclaim: “First U.S. discovery of crude oil from a drilled well was in 1814, Noble County, Ohio.”

OOGEEP adds that Ohio’s first commercial oil production began in 1860, followed by natural gas in 1884. By the early 21st century, more than 275,000 wells had been drilled in Ohio since 1860 – the fourth most of all producing states. Ohio historians also claim the petroleum industry’s earliest offshore wells (see Ohio Offshore Wells).

Kentucky has produced petroleum from 52 out of 102 counties – from rock formations dating from the Cambrian to Pennsylvanian ages. Oil production generally includes the state’s western and south-central region. Most natural gas is produced in eastern counties. Almost 1,000 wells were drilled in 2009 – including 304 dry holes. On the court house grounds in Whitley, a 1979 Kentucky Historical Society marker commemorates the McCreary County oil gusher, drilled about 100 miles to the west 150 years earlier.