Standard Oil and the Kerosene Stove

In the early 1900s, a foundry in Cleveland, Ohio, began manufacturing and selling an alternative to coal or wood-burning cast iron stoves. Thanks to a marketing partnership with Standard Oil Company, millions of rural kitchens would cook with kerosene-burning stoves.

After decades of fierce competition, John D. Rockefeller emerged and brought stability to petroleum markets — often at the expense of independent producers. By the turn of the 20th century, Rockefeller’s Standard Oil empire controlled more than 90 percent of all the petroleum produced, refined and sold in the United States.

America’s first automobile show in November 1900 barely hinted that demand for “gasolene” might someday exceed that of kerosene. Gasoline at that time was just a low-value by-product of kerosene refining.

Major U.S. refineries produced more gasoline than kerosene for the first time in 1917, after auto registrations reached almost 5 million with another 400,000 commercial, agricultural and military vehicles.

For electric companies, economies of scale were to be found in metropolitan markets where kerosene was already being challenged by manufactured gas — “Town Gas.”

No business case could be made for profitably delivering electricity to rural America. Farmers continued to rely on kerosene along with other Standard Oil petroleum products.  An Ohio entrepreneur then came up with an innovative alternative to cast iron stoves.

In 1901, Francis E. Drury, owner of the Cleveland Foundry Company, approached John D. Rockefeller with a partnership proposal. Drury’s plan would get Standard Oil into the business of selling his company’s alternative to the wood or coal-burning cast iron stove — a kitchen stove fueled with kerosene. 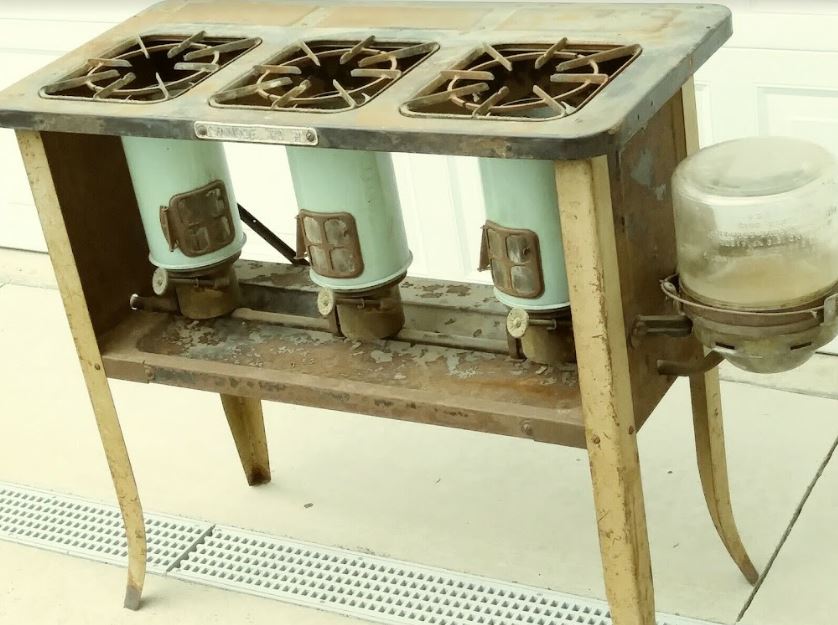 Thanks to early marketing help from 300 Standard Oil salesmen, a foundry in Cleveland, Ohio, manufactured millions of “Perfection” stoves that burned kerosene.

A few years earlier, Drury and partner Henry Parsons Crowell had explored the idea of a “lamp stove,” according to History of the Perfection Stove Company. “The two men discussed the practicability of such an item. A patent was applied for; the Cleveland Foundry Company began building and then selling the stove. The ‘Perfection Stove Company’ was born.”

Drury wanted to change old ways in the kitchen and the burdensome chores. He looked for “anything which will save the carrying up of coal, the carrying down of ashes, the noise and dust and dirt and odor and heat and hard labor and time consumed in attending to fires.”

Drury believed that in unelectrified rural America, kerosene stoves would find many receptive customers, adding company’s invention would “do nothing short of revolutionizing the domestic life of the day.”

Standard Oil promoted using its Pearl Oil kerosene “for the best results” in the Perfection stove.

“Pearl Oil, the Standard Oil Company’s kerosene,” noted one advertisement, “a most convenient and economical fuel — without the dust and dirt of coal or wood.”

“A Family Delight,” noted an advertisement that also encouraged readers, “Ask your dealer to demonstrate this high searing flame.” Standard Oil’s response to ever-increasing demand for gasoline prompted an amicable dissolution of the partnership.

“Through all our experiences with the Standard Oil Company acting as our distributors, our relations have been most cordial and profitable,” he added in his autobiography.

The Cleveland Foundry, which also made kerosene-fueled heaters, in 1917 merged with Cleveland Metal Products Company and used that name before becoming Perfection Stove Company a few years later. By 1922, Drury’s company reached cumulative sales of more than 8 million kerosene-burning stoves, heaters, and ranges.

Thanks to the Standard Oil kerosene network and the innovative stove, Drury became a very wealthy Ohio businessman. He built a mansion on Cleveland’s fashionable Euclid Avenue, down the street from Rockefeller. The kerosene stove entrepreneur died in 1932, three years before President Roosevelt’s New Deal established the Rural Electrification Administration, which would electrify half of America by 1940.

Lehman’s of Kidron, Ohio, in 2023 offered its Amish-made Perfection Kerosene Cookstove With Oven, “designed to handle daily cooking for large Amish families.” Priced at about $3,000, the stove included solid brass burners with seamless ceramic chimneys, thick porcelain coatings, and a steel, one-gallon tank for the kerosene.