The Smithsonian Institution’s “Hall of Petroleum,” which opened in the summer of 1967, devoted an entire wing to oilfield exhibits. The historic collection included cable-tool and rotary drilling rigs, pump jacks, and other oilfield exhibits.

Today, with a collection of more than three million artifacts, the National Museum of American History includes surprisingly few related to energy history or U.S. petroleum exploration and production technologies. It wasn’t always so.

In June 1967, an entire wing of exhibits — the “Hall of Petroleum” — opened at the museum on the National Mall in Washington, D.C.

Oil history today has a small role in the Smithsonian’s “America on the Move” exhibit. Photos by Bruce Wells.

Thousands of visitors viewed the hall’s extensive petroleum history exhibits, including the latest onshore and offshore oilfield technological advancements. Rows of old and new equipment highlighted the exhibit hall of the Museum of History and Technology, which had opened. The popular museum was renamed the National Museum of American History in 1980.

As tourists entered the museum’s Hall of Petroleum in 1967, they were greeted by a 13-foot-by-56-foot mural by Delbert Jackson, an artist from Tulsa, Oklahoma. Although it once featured a “Hall of Petroleum,” today’s National Museum of American History in Washington, D.C., does not exhibit any oil or natural gas exploration and production technologies.

Jackson (1915-1982) spent two years creating the painting that portrayed oil and natural gas exploration, production, refining, and delivery. His “Panorama of Petroleum” featured 22 Tulsa oilmen — and the artist himself. For museum visitors, the mural served as a visual guide to the equipment contents of the museum’s petroleum exhibits.

Jackson’s artwork would end up being stored for decades before finding a permanent home at Tulsa International Airport.

In 1967, “Panorama of Petroleum,” a 56-foot-long mural by Delbert Jackson, welcomed thousands of visitors to a museum on the National Mall. It also served as a guide to oilfield equipment exhibits.

The hall’s main exhibits were designed in 1967, “to give the public some conception of the involved nature of the processes of finding and producing oil and its preparation for consumption — whether by automobiles, airplanes, power stations, household furnaces, or the petrochemical industry,” explained Philip W. Bishop, author of the exhibit’s 1967 catalog, Petroleum. Tulsa recovered the forgotten “Panorama of Petroleum” mural, thanks to the city’s Gilcrease Museum. In 1998, the mural is restored and installed at the Tulsa International Airport, where it remains today. Photo by Bruce Wells.

“If the hall can increase the public’s knowledge of and respect for the technical skill and know — how of those who make this energy available, it will have served its purpose,” he added.

Large exhibits placed near the mural included a rotary drilling rig. The rig had been originally been used to drill water wells in Texas  before being adapted to drill shallow oil wells. The circa 1890s drilling machine manufactured in Corsicana was one of the oldest surviving examples of technology still used worldwide.

At the time, the booming oil town had its own baseball team, the Corsicana Oil Citys. The team’s catcher hit eight home runs in eight at bats in 1902 — still an unbroken baseball record. Other petroleum boom towns also started their own teams (see Oilfields of Dreams – Gassers, Oilers, and Drillers Baseball).

“Adjacent to the introductory mural is a large relief map of the United States, which shows the statistical growth of the industry, including crude oil and natural gas production and proved reserves,” Bishop continued. 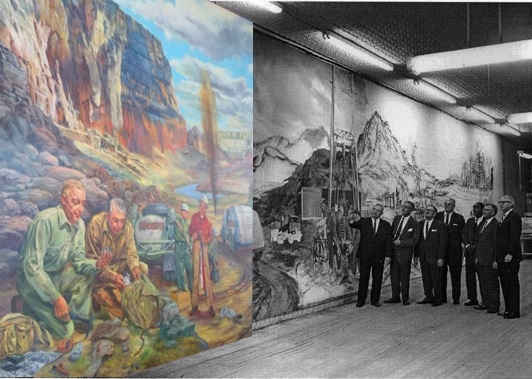 Prior to the 1967 opening, a rare photo (at right) shows Jackson’s mural. It will be displayed in what was then the Museum of History and Technology, completed just three years earlier.

“A comparison of the columns on the map provides dramatic evidence of the advancement of oil-finding technology especially after the doldrums of the 1920s when scientists — including those of the Smithsonian Institution — were confidently, if despondently, forecasting the exhaustion of America’s oil resources within a few year,” Bishop added. Although not on display, a 1930s “gravimeter,” was among National Museum of American History’s collection. It measured gravity anomalies associated with oil deposits.

Bishop’s extensive catalog of the Hall of Petroleum’s exhibits (now long since dispersed or in storage) included the evolution of geological knowledge in the early oil regions and the development of anticline theory, first advanced in 1860 but not immediately accepted.

Another section on exploring for oil showed how geophysicists locate areas for further exploration by drilling. “Here, the detailed review of the industry’s technology begins,” he explained.

Exhibits described drilling and completion technologies; increasing production by stimulation of the well by artificial (including hydraulic  fracturing — “fracking” — formations). Museum visitors learned about technologies for lifting oil to the surface; complex refining methods; natural gas and petrochemicals; and distribution of petroleum products to the consumer.

The catalog also described the transportation exhibits — including the evolution of oil tankers. One display included hand-crafted “models of tankers showing growth of the typical unit from the 1890s to the present.” A section call “Exploring by Drilling” showed how “a well in an area not previously drilled for oil or known to have produced it is called a ‘wildcat.’ The museum’s original catalog continued:

The place where drilling is started is usually determined by surveys which reveal likely geologic deviations.

However convincing this exploratory data, the drilling of a wildcat is full of risk. In 1966, for example, 90 percent of such wells drilled in the United States proved to be dry holes — a sufficient indication of the difficulties in discovering the formation which does contain oil.

The Hall of Petroleum’s Delbert Jackson mural, Bishop also proclaimed, “brings one to a detailed scale model of a modern rotary-drilling rig and to a brief history of the development of the gasoline dispensing pump, culminating in a modern blending pump.”

When the Hall of Petroleum exhibit closed, the mural was put into storage for three decades. The city of Tulsa recovered “Panorama of Petroleum,” thanks to the Gilcrease Museum. In 1998, the artwork was restored and installed inside the city’s historic airport five miles northeast of downtown.

According to Tulsa International Airport, the 10 companies in 1966 that sponsored painting of the mural and donation of it to the Smithsonian Institution were Litton Industries, Dowell Division of Dow Chemical Co., Helmerich & Payne, Inc., Oilwell Division of the United States Steel, Hughes Tool Co., Flint Engineering and Construction Co., Sunray DX Oil Company, and Williams Brothers Company.

Thousands of travelers today view the Tulsa airport’s mural in route to their gates. Those who have time to read the accompanying plaque see a numbered “who’s who” of the Oklahoma oilmen identified in the mural. For those who look closely, Jackson the artist can be found in the background — pictured as an oilfield roughneck.

The Smithsonian museum today features a hall devoted to transportation in American history (see America on the Move).

(2016); Tulsa Where the Streets Were Paved With Gold – Images of America