The Crude History of Mabel’s Eyelashes

Few associate 1860s oil wells with women’s eyes, but they are fashionably related. From paraffin to Vaseline, this is the story of how the goop that accumulated around the sucker rods of America’s earliest oil wells made its way to the eyelashes of women.

In 1865, a 22-year-old Robert Chesebrough left the prolific oilfields of Pithole and Titusville, Pennsylvania, to return to his Brooklyn, New York, laboratory. He carried samples of a waxy substance that clogged well heads. He already had dabbled in the “coal oil” business with experiments on refinery processes. Chesebrough’s laboratory expertise included distilling cannel coal into kerosene, a lamp fuel in high demand among consumers. He knew of the process for refining oil into kerosene, so when Edwin L. Drake completed the first U.S. oil well in August 1859, Chesebrough was one of many who rushed to northwestern Pennsylvania oilfields to make his fortune.

Scientific American magazine reported, “Now commenced a scene of excitement beyond description. The Drake well was immediately thronged with visitors arriving from the surrounding country, and within two or three weeks thousands began to pour in from the neighboring States.”

Chemist Robert Chesebrough’s fortune was out there somewhere. He just had to find it.

In the midst of the Venango County oilfield chaos, the young chemist noted that drilling was often confounded by a waxy paraffin-like substance that clogged the wellhead and drew curses from riggers who had to stop drilling to scrape away the stuff. Robert Chesebrough consumed a spoonful of Vaseline each day and lived to be 96. This early bottle from the collection of the Drake Well Museum in Titusville, Pennsylvania.

The only virtue of this goopy oilfield “sucker rod wax” was as an immediately available first aid for the abrasions, burns, and other wounds routinely afflicting the crews.

Chesebrough eventually abandoned his notion of drilling a gusher and returned to New York, where he worked in his laboratory to purify the troublesome sucker-rod wax, which he dubbed “petroleum jelly.” By August 1865, he had filed the first of several patents “for purifying petroleum or coal oils by filtration.”

Chesebrough experimented with the purported analgesic effect of his extract by inflicting minor cuts and burns on himself, then applying his purified petroleum jelly. He gave it to Brooklyn construction workers to treat their minor scratches and abrasions. After refining oilfield wax, Chesebrough experimented by inflicting minor cuts and burns on himself, then applying his petroleum balm.

On June 4, 1872, Chesebrough patented a new product that would endure to this day – “Vaseline.” His paraffin to Vaseline patent extolled new balm’s virtues as a leather treatment, lubricator, pomade, and balm for chapped hands. Chesebrough soon had a dozen wagons distributing the product around New York. Customers used the “wonder jelly” creatively: treating cuts and bruises, removing stains from furniture, polishing wood surfaces, restoring leather, and preventing rust. Within 10 years, Americans were buying it at the rate of a jar a minute

An 1886 issue of Manufacture and Builder even reported, “French bakers are making large use of vaseline in cake and other pastry. Its advantage over lard or butter lies in the fact that, however stale the pastry may be, it will not become rancid.”

Flavor notwithstanding, Chesebrough himself consumed a spoonful of Vaseline each day. He lived to be 96 years old. It was not long before thrifty young ladies found another use for Vaseline.

As early as 1834, the popular book Toilette of Health, Beauty, and Fashion had suggested alternatives to the practice of darkening eyelashes with elderberry juice or a mixture of frankincense, resin, and mastic. “By holding a saucer over the flame of a lamp or candle, enough ‘lamp black’ can be collected for applying to the lashes with a camel-hair brush,” the book advised.

Chesebrough’s female customers found that mixing lamp black with Vaseline using a toothpick made an impromptu mascara. Some sources claim that Miss Mabel Williams in 1913 employed just such a concoction preparing for a date. Williams was dating Chet Hewes. 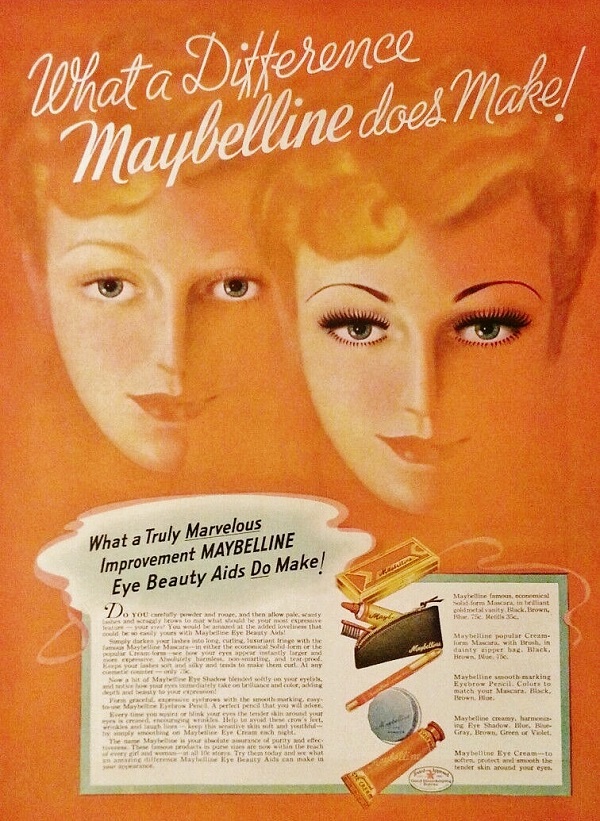 Women were using Vaseline to make mascara by 1915. Cosmetic industry giant Maybelline traces its roots to the petroleum product. “What a Difference Maybelline Does Make” magazine ad from 1937.

Perhaps using coal dust or some other readily available darkening agent, she applied the mixture to her eyelashes for a date. Her brother, Thomas Lyle Williams, was intrigued by her method and decided to add Vaseline in the mixture, noted a Maybelline company historian.

A more reliable version of the story — told by Williams’ grandniece Sharrie Williams — has Mabel demonstrating “a secret of the harem” for her brother.

“In 1915, when a kitchen stove fire singed his sister Mabel’s lashes and brows, Tom Lyle Williams watched in fascination as she performed what she called ‘a secret of the harem’ mixing petroleum jelly with coal dust and ash from a burnt cork and applying it to her lashes and brows,” Sharrie Williams explained in her 2007 book, The Maybelline Story and the Spirited Family Dynasty Behind It.

“Mabel’s simple beauty trick ignited Tom’s imagination and he started what would become a billion-dollar business,” concluded Williams. Inspired by his sister’s example, he began selling the mixture by mail-order catalog, calling it “Lash-Brow-Ine” (an apparent concession to the mascara’s Vaseline content). Women loved it.

Silent screen stars like Theda Bara, right, helped glamorize Maybelline mascara. By the 1930s, the paraffin to Vaseline to mascara concoction was available at five-and-dime store for 10 cents a cake.

When it became clear that Lash-Brow-Ine had potential, Williams, doing business in Chicago as Maybell Laboratories, on April 24, 1917, trademarked the name as a “preparation for stimulating the growth of eyebrows and eyelashes.”

In honor of his sister Mabel (she married Chet Hewes in 1926), Williams renamed his mascara “Maybelline.”

Whatever its petroleum product beginnings, Hollywood helped expand the Williams family cosmetics empire. The 1920s silent screen had brought new definitions to glamour. Theda Bara – an anagram for “Arab Death” – and Pola Negri, each with daring eye makeup, smoldered in packed theaters across the country.

Maybelline trumpeted its mail-order mascara in movie and confession magazines as well as Sunday newspaper supplements. Sales continued to climb. By the 1930s, Maybelline mascara was available at the local five-and-dime store for 10 cents a cake.

Special thanks to Linda Hughes, granddaughter of Mabel and Chet Hewes, who reviewed the American Oil & Gas Historical Society’s paraffin to Vaseline to Mascara article. She asked AOGHS add that Mabel was dedicated to her brothers work –- and helped run the Maybelline company in Chicago.

Paraffin from early U.S. oilfields also proved key the phenomenal success of business partners Edwin Binney and C. Harold Smith, who in 1891 patented an “Apparatus for the Manufacture of Carbon Black.” Their company mixed carbon black with oilfield paraffin and other waxes to introduce a paper-wrapped black crayon marker for crates and barrels.

By 1903, the Binney & Smith Company of Easton, Pennsylvania, was adding colors for a new product, “Crayola” crayons. Learn more about their petroleum products in Carbon Black & Oilfield Crayons.

Recommended Reading:  The Maybelline Story: And the Spirited Family Dynasty Behind It