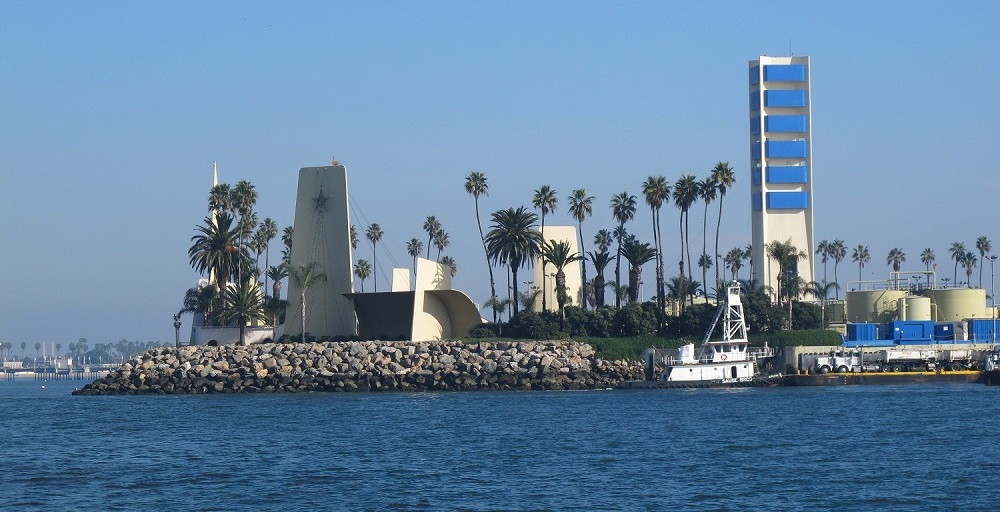 Island Grissom, one of the four THUMS islands at Long Beach, California, was named after Nasa astronaut Col. Virgil “Gus” Grisson, who died in 1967 in the Apollo spacecraft fire. Photo courtesy U.S. Department of Energy.

Many homeowners became aspiring oil drillers and speculators. Much of the hill’s land was sold and subdivided in real estate lots of a size described as “big enough to raise chickens.”

Derricks were so close to one cemetery that graves “generated royalty checks to next-of-kin when oil was drawn from beneath family plots,” noted one historian. By 1923, oil production reached more than one-quarter million barrels of oil per day. At the time, “the law of capture” for petroleum production ensured the formerly scenic landscape would be transformed. Competitors crowded around any new well that came in, chasing any sign of oil to the Pacific Ocean. The islands are among the most innovative oilfield designs in the world. Circa 1965 illustration courtesy Oxy Petroleum.

By the early 1930s, the massive Wilmington oilfield extended through Long Beach as reservoir management concerns remained in the future. Naturally produced California oil seeps had led to many discoveries south of the 1892 Los Angeles City field.

Onshore and offshore tax revenues generated by production of more than one billion barrels of oil and one trillion cubic feet of natural gas helped underwrite much of the Los Angeles area’s economic growth. But not without consequences. The U.S. Army Corps of Engineers reported, “Subsidence, the sinking of the ground surface, is typically caused by extracting fluids from the subsurface.”

Petroleum reserves brought drilling booms to southern California. By 1923, oil production reached more than one-quarter million barrels of oil per day from Signal Hill, seen in the distance in this detail from a panorama from the Library of Congress.

Although Californians had experience dealing with groundwater induced subsidence and the building damage it caused, by 1951 Long Beach was sinking at the alarming rate of about two feet each year. Earth scientists noted that between 1928 and 1965, the community sank almost 30 feet. TIME magazine call the bustling port “America’s Sinking City.”

After decades of prospering from petroleum production, the city prohibited “offshore area” drilling to slow the subsidence as the community looked for a solution.

On February 27, 1962, Long Beach voters approved “controlled exploration and exploitation of the oil and gas reserves” underlying their harbor. The city’s charter had prohibited such drilling since a 1956 referendum, but advances in oilfield technologies enabled Long Beach to stay afloat.

Directional drilling and water injection opened another 6,500 acres of the Wilmington field — and saved the sinking city.

Today the four islands, a total of 42 acres, include about 1,000 active wells producing 46,000 barrels of oil and 9 million cubic feet of natural gas every day.

Meanwhile, all of this happens amidst the scenic boating and tourist waters in Long Beach Harbor. The California Resources Corporation operates the offshore part on the islands of the Wilmington field, the fourth-largest U.S. oilfield, according to the Los Angeles Association of Professional Landmen, whose members toured the facilities in November 2017.

“Most interestingly, the islands were designed to blend in with the surrounding coastal environment,” explained LAAPL Education Chair Blake W.E. Barton of Signal Hill Petroleum. “The drilling rigs and other above-ground equipment are camouflaged and sound-proofed with faux skyscraper skins and waterfalls.”

Most people simply do not realize the islands are petroleum production facilities. From the shore, the man-made islands appear occupied by upscale condos and lush vegetation. Many of the creative disguises came courtesy of Joseph Linesch, a pioneering designer who helped landscape Disneyland.

The THUMs islands required exceptional designs, and “the people who were involved at the time were very creative visionaries,” noted Frank Komin, executive vice president for southern operations of the California Resources Corporation (CRC), owner of the islands.

About 80 percent of the company’s properties overlie the Wilmington oilfield, according to the CRC website, also noting, “Since 2003, CRC’s  operations, have generated over $5.2 billion in revenues, taxes and fees for the City of Long Beach and the State.” THUMS Island White, named for Col. Edward White II, the first American to walk in space, who died in 1967 along with Nasa astronauts “Gus” Grissom and Roger B. Chaffee. A fourth island was named for Nasa test pilot Ted Freeman, who in 1963 was the first fatality among the Nasa astronauts. Photo courtesy UCLA Library.

“Even today, those islands are viewed as one of the most innovative oil field designs in the world,” CRC executive Komin declared in a 2015 Long Beach Business Journal article.

“The islands have grown to become icons in which the City of Long Beach takes a great deal of pride,” Komin added.

The Journal article  explained that 640,000 tons of boulders, some as large as five tons, were mined and placed to build up the perimeters of the islands. “ Concrete facades constructed for aesthetic purposes also divert industrial noise away from nearby residents, For more noise abatement, electricity has provided nearly all of the power to run the islands.

Recommended Reading: An Ocean of Oil: A Century of Political Struggle over Petroleum Off the California Coast (1998). Your Amazon purchases benefit the American Oil & Gas Historical Society. As an Amazon Associate, AOGHS earns a commission from qualifying purchases.