A recent addition to the AOGHS Oil & Gas Families page has its own connection with U.S. refining history — and an artifact in search of an archive home.

“I have an old Atlantic Richfield brochure that I’d be glad to donate to any interested party,” Jane Benner noted in a June 2022 email to AOGHS. “My grandfather (G.E. Cooper) and his brother (Albert Cooper) as well as a future brother-in-law (W.R. Pierce) are pictured among the staff salesmen and administrators. The handwriting identifying them is that of my grand mother, Eleanor Cooper Benner.”

Seeking advice for locating an interested museum, Benner attached the cover and interior photos from her family’s 1921 issue of “The Atlantic Connect Rod” (perhaps an employee publication of the Atlantic Refining Company). The Philadelphia-based venture incorporated in 1870 to refine lamp kerosene and other petroleum products. 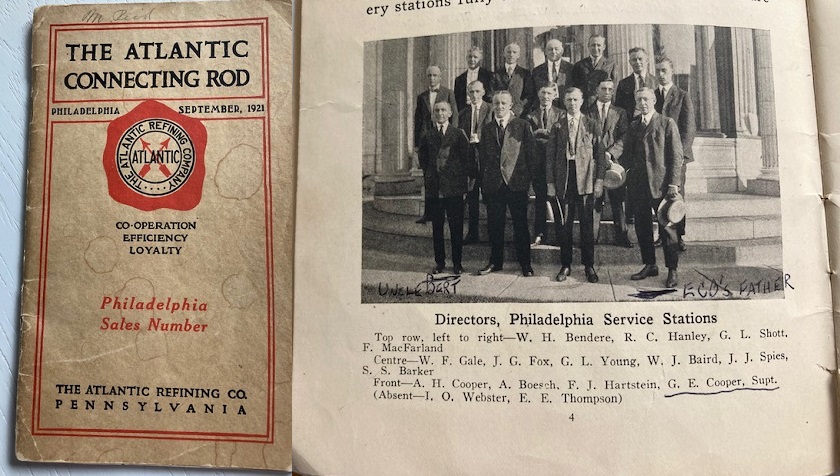 Taken over by John D. Rockefeller’s Standard Oil Trust by the end of the 20th century, Atlantic Refining Company returned as an independent company following the U.S. Supreme Court’s dissolution of the monopoly in 1911.

With its South Philadelphia refinery among the largest in the United States, in 1966 Atlantic Refining merged with Richfield Oil Corporation, creating the Atlantic Richfield Company (ARCO). Two years later, the new major oil company made the first oil discovery in Alaska’s Prudhoe Bay, leading to construction of the Trans-Alaska Pipeline in the mid-1970s.

“All I know of my grandfather’s work is that he was responsible for identifying locations to open gas stations in Philadelphia (right side of the road, heading out of town, as my mother told me). He died in 1927, so likely his work there was during the 1910s and 1920s,” Benner explained. The Atlantic Refining publication features Albert Cooper, brother of Jane Benner’s grandfather, as well as a future brother-in-law (W. R. Pierce). The handwriting identifying them is that of her mother, Eleanor Cooper Benner.

The Gulf station opening at 33rd and Chestnut streets was the start of the “Battle for Gasadelphia,” according to PhillyHistory. In April 1916, Gulf added a second station at at Broad Street and Hunting Park Avenue.

To find a home for her family’s Atlantic Refining artifact, Benner has been contacting Pennsylvania museums while researching more about the company and her grandfather’s career. She hopes her small but meaningful family heirloom will be preserved as part of America’s petroleum history.

“The booklet is remarkably informative about the company and their sales objectives at that time, including locations and photos of the early stations,” Benner noted in her email to AOGHS. “It’s fine to post my family story, as sparse as it is,” concluded the granddaughter of G.E. Cooper.

Benner added that she planned on contacting curators and archivists at oil museums, “in case anyone is interested.”