She became one of the most famous journalists of her day as a reporter for the New York World. Widely known as the remarkable Nellie Bly, Elizabeth J. Cochran Seaman, investigated conditions at an infamous mental institution, made a trip around the world in less than 80 days – and manufactured the first practical 55-gallon oil drum.

The 1901 Pan-American Exposition in Buffalo, N.Y., promoted her Iron Clad Manufacturing Company as “owned exclusively by Nellie Bly – the only woman in the world personally managing industries of such magnitude.” 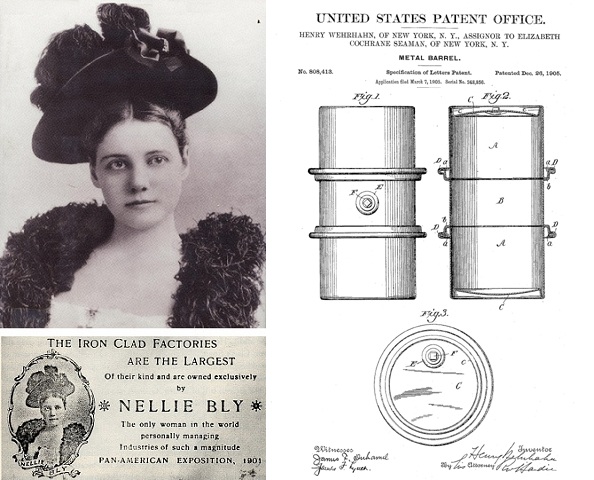 Recognizing the potential of an efficient metal barrel design, Nellie Bly acquired the 1905 patent rights from its inventor, Henry Wehrhahn, who worked at her Iron Clad Manufacturing Company.

For her first assignment as a reporter for Joseph Pulitzer’s newspaper, the New York World, Elizabeth Jane Cochran  (1867-1922) — Nellie Bly — feigned insanity for 10 days in New York’s notorious Blackwell’s Island Asylum. She had been hired in 1887 to write about the mental institution. Writing under the pen name Nellie Bly (a character in a popular song of the time), her numerous exposés and adventures would capture the public’s imagination and make her a world famous woman journalist.

In 1889, the New York World sent the 25-year-old Bly on a steamboat trip around the world to mimic Phileas Fogg in Jules Verne’s Around the World in Eighty Days. After a 72-day journey, she returned to New York to write a popular book.

Much has been written about this remarkable woman from Cochran’s Mills, Pennsylvania, and her investigative reporting career with the Pittsburgh Dispatch and the New York World. There’s a less known but fascinating side to her — the manufacturing “Iron Clad” steel oil drums.

In America’s oilfields, traditional wooden barrels had always been problematic for shipping oil. Despite the introduction of pipelines and railroad tank cars, there remained the need for manageable-sized, durable, leak-proof barrels (see History of the 42-Gallon Oil Barrel). Iron Clad Manufacturing Company received a 1902 patent for a stackable garbage can.

Standard Oil Company introduced a steel version of the common 42-gallon oil drum in 1902. It had the traditional cask-like appearance. Although stronger than wooden barrels, the new barrel could still leak. Nellie Bly had a better idea.

It was a big story for society pages in 1894 when Bly wed wealthy industrialist Robert Seaman, who was about 40 years her senior. At the time, Iron Clad produced milk cans, riveted boilers, tanks, and “The Most Durable Enameled Kitchen Ware Made.”

At the 1901 Pan-American Exposition, Iron Clad factories were promoted as being, “Owned exclusively by Nellie Bly – the only woman in the world personally managing industries of such a magnitude.”

Some questioned her management skills — but not her flamboyance — after her husband’s death in 1904, when she became the energetic and innovative president of his Iron Clad Manufacturing Company.

During a 1904 visit to Europe, Nellie Bly saw glycerin containers made of steel. “I determined to make steel containers for the American trade,” the young factory owner later proclaimed. She acquired her patented “metal barrel” design one year later.

Nellie Bly brought energy and ideas to the Brooklyn, New York, Iron Clad factory. The company had established itself as a kitchenware manufacture as shown in this 1884 advertisement.

“My first experiment leaked and the second was defective because the solder gave way, and then I brazed them with the result that the liquid inside was ruined by the brazing metal,” she said.  “I finally worked out the steel package to perfection, patented the design, put it on the market and taught the American public to use the steel barrel.”

Real credit must go to Nellie Bly’s employee, Henry Wehrhahn, who received two patents that would lead to the modern steel barrel, the 55-gallon oil drum.

The day after Christmas 1905, Wehrhahn received another patent for an improved metal barre, which he also assigned to the company’s new, young president. The design included a flanged metal barrel and the familiar encircling hoops allowed for guided rolling of the barrel for better control.

“My invention has for its object to provide a metal barrel which shall be simple and strong in construction and effective and durable in operation,” Wehrhahn explained in his patent, (no. 808,327).

Wehrhahn, who had entered the machinist trade in 1884 at age 18, had become superintendent of the Iron Clad Manufacturing Company in 1902, the same year the company patented a stacking metal garbage can.

Iron Clad Manufacturing, which also patented an innovative milk, benefitted from having a celebrity journalist as president. “I am the only manufacturer in the country who can produce a certain type of steel barrel for which there is an immense demand at present, for the transportation of oil, gasoline, and other liquids,” she proclaimed

At its peak, Iron Clad employed 1,500 and could produce 1,000 steel barrels daily, but then charges of fraud led to bitterly contested bankruptcy proceedings, beginning in 1911. Nellie Bly happened to be in Austria looking for financial backers when World War I began.

Wehrhahn had moved on to become superintendent of Pressed Steel Tank Company of Milwaukee, Wisconsin, by 1912.

Iron Clad Manufacturing Company eventually succumbed to debt, and Bly returned to newspaper reporting, covering women’s suffrage events and Europe’s Eastern Front during the war. She died of pneumonia in 1922 – two years after the 19th Amendment secured her the right to vote.

She was eulogized as Nellie Bly, “the best reporter in America,” by the New York Evening Journal. Her steel barrels ultimately became the ubiquitous 55-gallon oil drum of today, and she should be remembered for her unique contribution to America’s petroleum history.