The U.S. offshore drilling for oil began in the late-19th century on lakes and at the ends of Pacific Ocean piers. Until an innovative Kerr-McGee drilling platform in 1947, no offshore drilling company had ever risked drilling beyond the sight of land. Many of the earliest offshore oil wells were drilled from piers at Summerland in Santa Barbara County, California. Circa 1901 photo by G.H. Eldridge courtesy National Oceanic & Atmospheric Administration.

In 1896, as enterprising businessmen pursued California’s prolific Summerland oilfield all the way to the beach, the lure of offshore production enticed Henry L. Williams and his associates to build a pier 300 feet out into the Pacific — and mount a standard cable-tool rig on it. 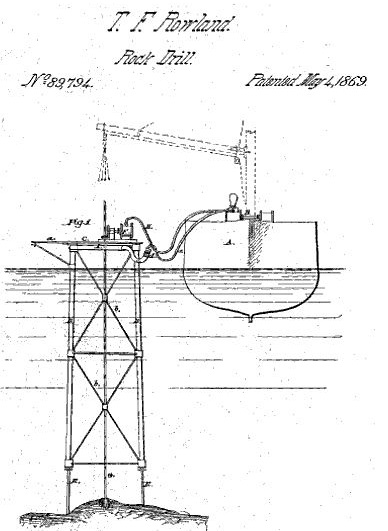 Although never built, Thomas Rowland’s 1869 design for an offshore platform was far ahead of its time.

By 1897 this first offshore well was producing oil and 22 companies soon joined in the boom, constructing 14 more piers and over 400 wells within the next five years. The Summerland offshore field produced for 25 years — fueling the growth of California’s economy.

Piers, Platforms and a Patent

In 1894, Henry Williams drilled two wells on a California beach. He drilled another in 1895 with encouraging results. This led Williams and others to exploring for oil offshore the next year. They constructed piers and drilled wells, leading to the realization that the Summerland oilfield extended offshore. This would be the first offshore field developed in the nation by drilling offshore wells from piers. – From Santa Barbara County records

In 1911, Gulf Refining Company abandoned the use of piers. It drilled Ferry Lake No. 1 on Caddo Lake, Louisiana, using a fleet of tugboats, barges, and floating pile drivers. When the well came in at 450 barrels per day, Gulf constructed platforms every 600 feet on each 10-acre lakebed site.

The Caddo Lake wells — completed over water without a pier connection to shore — have frequently been called America’s first true offshore drilling.

A petroleum company based in Pittsburgh, Pennsylvania, drilled one of the first “over water” oil wells in 1911, according to historian Bob Bowman of the East Texas Historical Association. “In the early 1900s, 27-year-old Walter B. Pyron, of Blossom, Texas, a production foreman for Guffy Oil Company, noticed gas bubbles rising from Caddo Lake,” Bowman explained in 2006. “He and other Guffy employees rowed across the lake, lighting strings of the bubbles”.

“In early May, 1911, after months of hard work and battles with mosquitoes, alligators and moccasins, the Ferry Lake No. 1 was drilled to a depth of 2,185 and began producing 450 barrels of oil a day,” reported Bowman. Pyron convinced his superiors at Gulf Oil Corporation — the successor of Guffy Petroleum Company — to drill on the lake.

Rigs on an Ohio Lake

Ohio oil documents record hundreds of oil wells pumping far out into a lake — 20 years before drillers ventured into the waters of Louisiana’s Caddo Lake. Even earlier, some historians say the true beginning of the modern offshore industry can be traced to an 1869 U.S. patent. Thomas Fitch Rowland of Greenpoint, New York, patented a “submarine drilling apparatus” on May 4, 1869.

In 1938, Pure Oil and Superior Oil Company built a freestanding drilling platform in the Gulf of Mexico — despite many logistics, engineering and communications challenges.

They hired a Houston engineering and construction company, Brown & Root Marine Operators to build a 320-foot by 180-foot freestanding wooden deck in 14-feet of water about a mile offshore. The chosen drilling site was near Creole, Louisiana.

Using onshore building criteria and intuition, the Creole platform was designed to withstand winds of 150 mph and constructed 15 feet above the water. Three hundred treated yellow pine pilings were driven 14 feet into the sandy bottom.

Onshore salt domes were recorded as early as 1890 by the Geological Survey of Texas.

The Superior-Pure State No. 1 well was successful – but was wiped off its pilings by a hurricane in 1940. The platform was quickly rebuilt and put back into production in the four million barrel field. “It may be tentatively assumed that the Gulf of Mexico is a potential source of salt-dome oil,” reported geologist Orval Lester Brace in 1941.

“Whether or not it will ever be economically feasible to explore these waters for the domes that must exist is a question for the future to answer,” Brace added. Salt dome geologic formations had attracted petroleum companies since the 1901 Spindletop discovery at Beaumont, Texas.

Kerr-McGee dramatically answered the salt dome question in 1947 with an experimental offshore rig. This Kerr-McGee drilling platform, known as Kermac Rig No. 16, was the first offshore rig in the Gulf of Mexico that was out of sight of land. Photo courtesy New Orleans Times-Picayune.

Nevertheless, Dean McGee of Kerr-McGee Oil Industries Inc. partnered with Phillips Petroleum and Stanolind Oil & Gas Co. to secure leases for exploratory wells in the Gulf of Mexico. They hired Brown & Root to build a freestanding platform 10 miles out to sea.

“We decided to explore the areas where the really potential prolific production might be — salt domes — the good ones on land were gone, but we could move out in the shallow water and, in effect, get into a virgin area where we could find the real class-one type salt dome prospect,” McGee said.

Vessels were needed to provide supplies, equipment, and crew quarters for the drilling site, 43 miles southwest of Morgan City, Louisiana. The gradually sloping Gulf of Mexico reached only about 18-feet deep at the drilling site. A second platform would be built about eight miles from the first at Ship Shoal Block 28. Sixteen 24-inch pilings were sunk 104 feet into the ocean floor to secure a 2,700 square foot wooden deck.

The Kermac No. 16 well stood in almost 20 feet of water, 10 miles at sea. Drilling began on September 10, 1947, and the biggest hurricane of the season arrived a week later, with winds of 140 mph. Kerr-McGee had $450,000 invested in the project. Both platforms were evacuated during the hurricane, but damage was minimal. Drilling promptly resumed. On November 14, the Kermac No. 16 well began producing 40 barrels of oil per hour.

By the end of 1949, 11 oil and natural gas fields were found in the Gulf of Mexico with 44 exploratory wells, according to the National Ocean Industries Association (NOIA), which notes that the industry continued to through the 1950s.

In June 1954, a revolutionary mobile platform concept was launched from its shipyard in Louisiana. The design and technologies of Mr. Charlie later would be declared a mechanical engineering landmark. Learn more in Mr. Charlie, First Mobile Offshore Drilling Rig.

Also in 1954, a contract for the first jack-up oil rig was signed by Houston-based Zapata Oil, led by future U.S. President George H.W. Bush. The inventor, R.G. LeTourneau, had designed an all-weather drilling platform that could be easily converted to a stable structure by lowering legs on two sides and one end of the hull.

Today’s offshore energy industry benefits come from the hard lessons learned from of open water experience, according to NOIA. Compared to the limits of the early technology, “achievements will no doubt pale in comparison to what the future of offshore exploration will bring.” The Troll A natural gas platform, today operated by Statoil, in 1996 was not only “among the largest and most complex engineering projects in history,” it was “the largest object ever to be moved by man across the surface of the Earth.” Photo courtesy Amusing Planet.

The National Ocean Industries Association notes: “As the industry entered the last decade of the 20th century, advancing technology ensued. New depth records for drilling reached 7,625 feet in the Gulf of Mexico.” In the North Sea, the Troll A  natural gas platform stands in the North Sea in 1,000 feet of water and is 1,500 feet high. According to a March 2013 article posted at Amusing Planet, in 1996 the platform set the Guinness World Record for largest offshore gas platform. “The title now belongs to the Petronius Platform in the Gulf of Mexico, which stands 2,000 feet above the ocean floor.”

The first use of helicopters offshore was at the request of Kerr-McGee and Humble Oil. A Bell Helicopter advertisement from 1954 is preserved at the Ocean Star Offshore Drilling Rig and Museum.

A flat area on an LST — from World War II “landing ship, tanks” — anchored next to Humble Rig 28 served as landing pad for one of the first helicopters to be flown offshore. Helicopters would become a common way for getting crews to and from remote platforms.

The heavy components of an offshore rig, sometimes assembled at the rig’s destination, have a further use. Scientists have studied new roles for petroleum platforms as artificial marine habitats.

Whether placed as an artificial reef or a working (producing petroleum) structure, state and federal investigations have been found rigs to increase the algae and invertebrates that attract and significantly increase numbers and species of fish.

On November 11, 2007, a mile and a half underwater, a petroleum company’s remote control submersible camera captured a rarely seen Magnapinna squid.

The video obtained by National Geographic News shows the alien-like squid loiter above the seafloor in the Gulf of Mexico. The clip — from Shell Oil Company’s Perdido production site — marks the first sighting of a Magnapinna or “big fin” squid near oil development. Marine biologists now partner with petroleum companies.

From 1980 to 1999, about 7.4 billion barrels of oil were produced in all federal waters. Of that production, less than a thousandth of one percent spilled — lower than the natural seepages of oil from the sea floor, according to the U.S. Coast Guard.

According to the National Academy of Sciences, more than 60 percent of all oil found in seawater is not from wells, but from natural seepage (the largest emitting 1,000 barrels of oil a week); 32 percent comes from shipping and run-off from land. Four percent can be attributed to tanker spills.

To meet increasing U.S. demand while addressing environmental concerns, new technologies have led to drilling rigs capable of drilling 250 miles offshore to ocean depths exceeding 10,000 feet. In 2021, about 3,500 petroleum-related structures stood in the Gulf of Mexico, creating the largest artificial reef system in the world.

Offshore Federal production in fiscal year 2020 reached about 641 million barrels of oil and 882 billion cubic feet of gas, “almost all of which was produced in the Gulf of Mexico, accounting for about 15 percent of U.S. oil production and two percent of domestic natural gas production, according to the Bureau of Ocean Energy management (BOEM).

Gulf of Mexico crude oil production in 2021 averaged 1.7 million barrels per day, according to the Energy Information Administration (EIA).

(2009); Women of the Offshore Petroleum Industry tell Their Stories (2019). Your Amazon purchase benefits the American Oil & Gas Historical Society. As an Amazon Associate, AOGHS earns a commission from qualifying purchases.