END_OF_DOCUMENT_TOKEN_TO_BE_REPLACED

Although the “Old Union well” initially yielded about 30 barrels of high quality oil, production declined to one barrel of oil day and the prospect was abandoned, according to K.R. Aalto, a geologist at Humboldt State University. END_OF_DOCUMENT_TOKEN_TO_BE_REPLACED Lyne Barret’s interest in finding the newly prized resource was no doubt prompted by its lucrative $20 a barrel selling price.  He joined the chase for petroleum riches, but prudently continued to operate his successful mercantile partnership in Melrose.
END_OF_DOCUMENT_TOKEN_TO_BE_REPLACED

END_OF_DOCUMENT_TOKEN_TO_BE_REPLACED

The first major Mississippi oil well was drilled following a geological survey by a young geologist — who had sought a suitable Yazoo County clay to mold cereal bowls for children. “It all began quite independently of any search for oil,” noted a southern history journal decades later.

In February 1939, Frederic F. Mellen worked for the Works Progress Administration in Yazoo County during the Great Depression. The 28-year-old geologist supervised a clay and minerals survey project, “to locate a suitable clay to mold cereal bowls and other utensils for an underprivileged children’s nursery.”

At Perry Creek, about a mile southwest of Tinsley, Mellen’s survey found a strata of Mississippi’s known Jackson formation. But the seam was 250 feet above where it was supposed to be. It was a salt dome structure, well known since Texas’ spectacular Spindletop Hill discovery in January 1901.

Mellen urged more seismographic testing. Natural gas had been produced in Mississippi in the mid-1920s, and the Jackson formation was persuasive evidence that oil could be found along Perry Creek. Indications in the Yazoo Clay suggested an anticlinal structure, according to Edgar Wesley Owen in Trek of the Oil Finders: A History of Exploration for Petroleum (1975).

“Although the favorable area had been leased by an oil company about 10 years earlier and relinquished after a seismic examination, the Survey issued a press release in April 1939 describing its findings and recommending that the structure be drilled,” Owen explained. When published in the State Geological Bulletin on April 12, 1939, Mellen’s startling survey results prompted renewed interest in finding Mississippi’s first commercial oil deposits after decades of searching and hundreds of dry holes.

The Tinsley formation included, “a northward contour closure of at least 135 feet – a structure so favorable for oil and gas accumulation as to warrant further geologic sturdy and seismographic exploration,” the Bulletin press release proclaimed, adding that it “especially should it be further explored for the reason that it lies less than 35 miles north-west of the Jackson Gas Field.”

On September 5, 1939, after six weeks of drilling, Union Producing completed the G.C. Woodruff No. 1 well at a depth of 4,560 feet. The well, which had shown signs of oil at the end of August, flowed at 235 barrels of oil a day from a sandstone later named the Woodruff Sand. Within 35 days, drilling companies, investors, and speculators recorded more than $5 million in lease and purchase transactions.

“Almost eighty years to the day after the discovery of the famous Drake well on Oil Creek, Pennsylvania, the first commercially important oil pool in the southeastern states was discovered,” declared John S. Ezell in The Journal of Southern History, (Vol.18, No. 3, August 1952).

“Hotels are over-flowing, restaurants are overtaxed, map companies are dizzy from the rush of new business,” reported Oil Weekly, adding that “farmers are trying to obtain drilling clauses with leases, geophysical crews are slipping through the woods, and in every hotel lobby John Doe will tell you he has a sure-shot lease – for sale at the right price.”

Three weeks after the Woodruff No. 1 well was completed, Union Producing exported to Louisiana the first barrel of Mississippi crude oil, sending four tank cars carrying 8,000 gallons of oil from Tinsley Station to the Standard Oil Refinery at Baton Rouge.

Cumulative production from the Tinsley field would reach more than 224 million barrels of oil and 14.4 billion cubic feet of natural gas by 1997, according to the American Association of Petroleum Geologists. “The discovery and development of the largest oil field in the southeastern States is an exciting part of Mississippi’s history,” proclaimed Mississippi State Geologist William H. Moore in 1974.

“The fact that this giant field was discovered through the application of basic geology, in an investigation not necessarily slated toward oil and gas exploration, is a tribute not only to the geologist making the discovery but to all geologists engaged in similar undertakings,” he added. The Office of the Mississippi Geological, Economic and Topographical Survey, in 1974 published Moore’s Tinsley Field 1939-1974, A Commemorative Bulletin. A Yazoo City newspaper editor was among his sources regarding the historic well.

“When the Tinsley oil field was discovered in August of 1939 Mississippians, and Yazooans in particular, thought at last Mississippi would mushroom in development as did Oklahoma and parts of Texas and Louisiana,” noted Norman Mott Jr., editor of the Yazoo City Herald in 1974.

“Yazoo City experienced a great deal of excitement and the chaos of the early days as the center of the beginning oil industry in the state,” Mott said. “Adding greatly to the dreams of an oil boom was the discovery in the spring of 1940 of the Pickens Field in eastern Yazoo County. However, Pickens was not another Tinsley.”

Frederic Mellen (1911-1989) was a founding member in 1939 of the Mississippi Geological Society. In 1985, the society sponsored a summer field trip led by Mellen, “to traverse the very hillsides of Yazoo County that he had mapped 47 years previously in his discovery of the large surface anticline that later became the giant Tinsley field,” reported Stanley King in A Brief History Of The Mississippi Geological Society.

As of 2017, with secondary recovery through carbon-dioxide injection, the Tensely oilfield was still producing more than 6,000 barrels of oil a day, about eight percent of Mississippi’s total oil production.

Recommended Reading: Oil in the Deep South: A History of the Oil Business in Mississippi, Alabama, and Florida, 1859-1945

American oil history began in a valley along a creek in remote northwestern Pennsylvania. Today’s exploration and production industry was born on August 27, 1859, near Titusville when a well specifically drilled for oil found it.

Although crude oil had been found and bottled for medicine as early as 1814 in Ohio and in Kentucky in 1818, these had been drilled seeking brine. Drillers often used an ancient technology, the “spring pole” Sometimes the salt wells produced small amounts of oil, an unwanted byproduct. 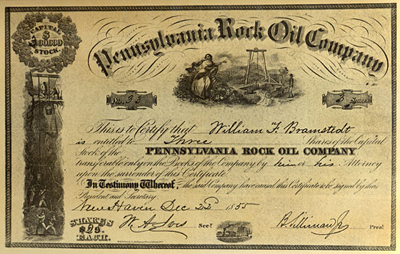