The discovery of oil along a small creek in Titusville, Pennsylvania, in August 1859 launched the American petroleum industry. Drilled just 69.5 feet deep at Oil Creek by former railroad conductor Edwin Drake, the well produced oil that could be refined into an inexpensive lamp fuel, kerosene. 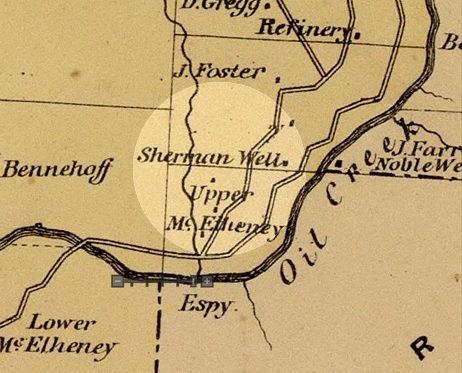 Drake’s well, drilled for the first U.S. oil company established by George Bissell, brought the country’s first drilling boom as entrepreneurs rushed in. Farmers who leased their land were among the first to benefit.

“Oil Creek was soon taken up and within a relatively short time, the entire valley as far back as into the hillsides, had been leased or purchased,” author Paul Gibbons noted.

J.T. Foster’s farm on Pioneer Run hillside off Oil Creek was in “the dry diggings” where few were willing to gamble. Nonetheless, newly minted oil operators gathered investors to try to find oil. Capital was hard to come by.

On the 200-acre Foster farm, one struggling and almost cashless outfit had to trade a one-sixteenth interest for $80 and an old shotgun to continue drilling on its Sherman well.

Back on the Foster farm lease, the Sherman well (saved earlier for $80 and a shotgun) in March 1862 was completed as the “best single strike of the year,” despite being “above all the other flowing wells” according to the Hornellsville Tribune. Leases became highly prized and, as historian Terence Daintith observed, “subleasing was also a money machine.” The Venango Citizen reported, “Territory along the river above and below Franklin has been changing hands at high figures, and preparations are being made for active work.”

Just four acres close to the Sherman well sold for $220,000 as venture capitalists, entrepreneurs, and speculators tried their luck in the newly created petroleum industry. The Foster Farm Oil Company and the Shoe & Leather Petroleum Company were among many corporations formed to exploit exploration opportunities.

All over the Pioneer Run hillside, wooden derricks with steam engines pumped away even as overproduction drained the oilfield. Margins disappeared and companies began to fail.

Foster Farm Oil Company’s fortunes faded, as did the value of its stock. In 1869, total U.S. oil production topped 4 million barrels and oversupply drove many out of business. After 10 years in the oil patch, Elisha C. Foster departed to enter the banking business in Connecticut.

By 1867, Shoe & Leather Petroleum had five producing wells, on five different tracts, with five different operators, yielding about 350 barrels of oil a day. But frantic production at Pioneer Run and Oil Creek, compelled land owners above oil reserves to drill, “regardless of price or market demand, in order to prevent his neighbor from draining his reserves.”

This traditional “law of capture” rendered an oily landscape thick with derricks, according to local accounts.