This Week in Petroleum History, November 8 to November 14

Edwin Laurentine Drake, the former railroad conductor who drilled America’s first commercial oil well, died in Bethlehem, Pennsylvania, at the age of 61. His famous 1859 Pennsylvania oil discovery had brought prosperity to many, but Drake had lost all his money in speculative ventures. He became so destitute the Pennsylvania legislature voted him a $1,500 pension in 1873. 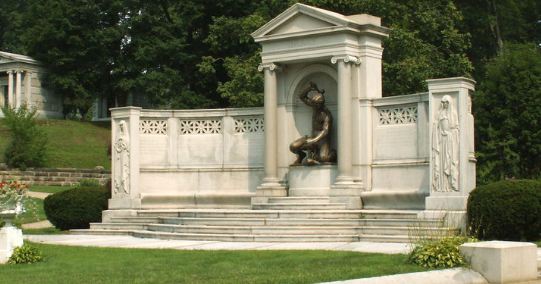 After America’s first independent oil producer died in 1880 in relative obscurity, Standard Oil executive Henry Rogers anonymously commissioned a monument for Drake, who was re-interred in 1902 in Woodlawn Cemetery at Titusville. It was overdue recognition of the man who launched the U.S. oil industry (see Edwin Drake and his Oil Well).

Six years after the first New Mexico oil wells, a giant oilfield was revealed in a remote region of Lea County at the southeast corner of the state. Midwest Refining Company (the future Amoco) discovered what would become the Permian Basin’s Hobbs oilfield while searching for a northern trend of the Scarborough field, which had launched a 1927 drilling boom in nearby Winkler County, Texas. After finding oil at a depth of 4,220 feet, “the Midwest’s State No. 1, discovery well of the future Hobbs oil pool, was completed, producing 700 barrels of oil per day on state land,” noted Gil Hinshaw in his 1976 book, Lea County’s Last Frontier. By January 1930, a well drilled by Humble Oil Company (the future Exxon) three miles northwest of Hobbs would produce 9,500 barrels of oil a day. Ten years after a similar ceremony in England, a second Oil Patch Warrior statue was dedicated in Ardmore, Oklahoma, home to many of the volunteers who drilled in Sherwood forest during World War II. The seven-foot bronze statues, sculpted by Jay O’Meilia of Tulsa, honor the once top-secret English Project, which produced more than 3.5 million barrels of oil for the war effort.

Forty-two volunteers from Noble Drilling and Fain-Porter Drilling Company of Oklahoma City drilled 94 producing wells between March 1943 and March 1944 (derrickhand Herman Douthit fell to his death). In May 1991, Noble Drilling Corporation funded the return of 14 surviving oilmen to the dedication of O’Meilia’s first “Oil Patch Warrior” statue in Sherwood Forest. “Like most early gas companies, New York Gas would focus its efforts on street lighting, in this case, supplementing or replacing the whale-oil lamps that were installed by the city beginning in the 1760s,” a Con Edison historian noted. Prior to the 1884 merger, streets were often being torn up by competing workmen installing or repairing their own company’s lines – and removing those of a rival.

An 1899 article in the New York World profiled Mrs. Byron Alford – the “Only Woman in the World who Owns and Operates a Dynamite Factory.”

Mrs. Alford’s dangerous business operated on five acres outside of Bradford, Pennsylvania, with a daily production of 3,000 pounds of nitroglycerin and 6,000 pounds of dynamite. Local drillers used the explosives for “shooting” wells to boost production. The newspaper noted that the astute businesswoman manufactured volatile mixtures in 12 separate buildings, all unpainted and made of wood (being less expensive to rebuild). Water-flooding technology for enhanced recovery spread throughout the petroleum industry – and extended many wells’ lives by as much as a decade.  After merging with four independent oil companies (January Oil Company, Brown Seal Oil, Andrews Petroleum and Boyd Oil) in 1924, Forest Oil was headquartered in Denver before merging with a privately held Houston company in 2014.

The American Chemical Society designated the discovery of a high-density polyethylene process as a National Historic Chemical Landmark in a ceremony at the Phillips Petroleum Company in Bartlesville, Oklahoma. The oil company had entered the plastics business in 1951 after discovering a catalyst for creating solid polymers. “The plastics that resulted — crystalline polypropylene and high-density polyethylene (HDPE) — are now the core of a multibillion-dollar, global industry,” the society noted. Among the first customers for Phillips Petroleum plastics was Wham-O, which used it to make Hula Hoops and Frisbees in the 1950s.

Three natural gas containers – gasometers – exploded in Pittsburgh, producing “tremors such as might have been caused by a severe earthquake,” according to a 1927 report, which noted the deaths of 28 people and injury of more than 400. First used in the late 19th century for manufactured gas (and throughout the 20th century for natural gas), gasometers were large, cylindrical containers for storing gas at near atmospheric pressure at ambient temperatures. The volume of stored gas varied, with pressure added from the weight of a movable cap.

According to a 2006 article in Pittsburgh Magazine, workmen had been using acetylene torches to repair a leak on top of a tank with a capacity of 5 million cubic feet of gas. Gasometers structures have been replaced by high-pressure vessels to store natural gas in liquid form (learn more in Horace Horton’s Spheres).

The modern offshore petroleum industry began in the Gulf of Mexico with the first oil well successfully completed out of sight of land. Brown & Root Company built the freestanding platform 10 miles offshore for Kerr-McGee and partners Phillips Petroleum and Stanolind.

The unique offshore platform, Kermac 16, could withstand winds as high as 125 miles per hour. Brown & Root constructed the experimental platform at a time when no equipment specifically designed for offshore drilling yet existed. With $450,000 invested, Kerr-McGee completed the discovery well, which produced 960 barrels of oil a day in about 20 feet of water off Louisiana’s gradually sloping Gulf of Mexico coast. Kerr-McGee had purchased World War II surplus utility freighters and materials to provide supplies, equipment and crew quarters for the drilling site at Ship Shoal Block 32. Sixteen 24-inch pilings were sunk 104 feet into the ocean floor to secure the 2,700 square foot wooden deck – which successfully withstood the biggest Category 5 hurricane of the 1947 season a week after drilling had begun.

Kermac 16 produced 1.4 million barrels of oil and 307 million cubic feet of natural gas before being shut down in 1984. Learn more about offshore pioneers and technology in Offshore Petroleum History.

Texas Eastern Transmission Corporation, a company formed 11 months earlier specifically to acquire the World War II surplus 24-inch “Big Inch” and 20-inch “Little Big Inch” pipelines, won with a bid of $143,127,000 — the largest sale of the war’s surplus material to the private sector. By the 1950s, Texas Eastern Transmission had converted both oil products pipelines to natural gas, which was needed for the Appalachian region. By the 2000s, transmission would become bi-directional for carrying natural gas from the Marcellus and Utica shale to mid-west markets. The Big Inch and Little Big Inch pipelines today are listed on the National Register of Historic Places.

(2014); The Secret of Sherwood Forest: Oil Production in England During World War II

(2017); Offshore Pioneers: Brown & Root and the History of Offshore Oil and Gas