This Week in Petroleum History, March 9 to March 15 “The wartime shipbuilding boom of World War I led American and British shipbuilders to explore the advantages of electric welding in depth,” Liollio reported in 2017.

The Texaco oil products tanker was “the first truly electrically welded ship,” he explained in “The M/S Carolinian: The First Welded Commercial Vessel.” The welding eliminated the need for about 85,000 pounds of rivets. The success of the prototype led to “the standard of welded hulls and internal combustion engines would become universal in construction of new vessels.” The Mattel doll also includes Polybutylene Terephthalate (PBT), a thermoplastic polymer often used as an electrical insulator. Barbie uses a custom PBT with a mineral component to facilitate injection molding; the proportions of her adult figure (36-38-38) remain controversial. Polyvinyl-Chloride (PVC ), unlike many synthetic polymers, is not solely based on the feedstock ethylene, which comes from “cracking” natural gas. Barbie’s silky hair – and many of her designer outfits – come from the world’s first synthetic fiber, nylon, invented by DuPont Corporation in 1935 (see Nylon, a Petroleum Polymer).

Boring for salt brine with a simple spring-pole device on a farm near Burkesville, Kentucky, Martin Beatty found oil at 171 feet deep. Disappointed, he searched elsewhere. Because oil from his well would be bottled and sold, some historians consider Beatty’s discovery the earliest commercial oil well in North America. 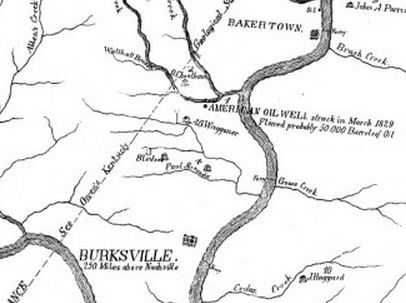 Beatty, an experienced salt driller from Pennsylvania, had drilled brine wells to meet growing demand from settlers needing the dried salt to preserve food. He bored his wells by percussion drilling – raising and dropping a chisel from a sapling, an ancient technology for making hole.

According to historian Sheldon Baugh, prior to the Cumberland County oilfield discovery, Beatty first found oil in a McCreary County brine well in 1819. That well “provided very little of the useless stuff” and was soon forgotten. The historian described the scene of Beatty’s oil well of March 11, 1829: On that day, well-driller Beatty bragged to bystanders “Today I’ll drill her into salt or else to Hell.” When the gusher erupted he apparently thought he’d succeeded in hitting “hell”! As the story goes “he ran off into the hills and didn’t come back.”

A later newspaper account reported Beatty’s well was neglected for years, “until it was discovered that the oil possessed valuable medicinal qualities.” Oil from Kentucky’s Great American Oil Well eventually found its way to Pittsburgh, where Samuel Kier bottled and sold it as medicine. He would later refine kerosene from oil produced from the first commercial U.S. oil well.

Once known as “Dry Hole Slick,” independent producer Thomas B. Slick discovered a giant oilfield on his way to becoming far better known as Oklahoma’s King of the Wildcatters. His No. 1 Wheeler uncovered the Drumright-Cushing oilfield, which produced for the next 35 years, reaching 330,000 barrels of oil a day at its peak. Slick then began an 18-year streak of discovering some of America’s most prolific fields in Oklahoma, Kansas, and Texas.

By 1929, Slick was the largest independent operator in the United States with a net worth up to $100 million. By 1930, in the Oklahoma City field alone, he completed 30 wells with the capacity to produce 200,000 barrels of oil daily. Slick’s sudden death from a stroke in August 1930 at age 46 ended a remarkable oilfield career.

The U.S.S. Texas was converted to burn fuel oil in 1925. The “Big T” – today the Battleship Texas State Historic Site docked on the Houston Ship Channel – was the first battleship declared to be a U.S. National Historic Landmark. Learn more in Petroleum and Sea Power.

Their mission was to drill wells in England’s Sherwood Forest and help relieve the crisis caused by German submarines sinking Allied oil tankers. Four rotary drilling rigs were shipped on separate transport ships. One of the ships was sunk by a U-Boat.

With the future of Great Britain depending on petroleum supplies, the Americans used Yankee ingenuity to drill an average of one well per week. Their secret work added vital oil to fuel the British war effort. Read the little-known story of the Roughnecks of Sherwood Forest.

Two hundred and fifty miles north of the Arctic Circle, Alaska’s Prudhoe Bay oilfield was discovered by Richfield Oil (ARCO) and Humble Oil Company (Exxon). The Prudhoe Bay State No. 1 exploratory well arrived more than six decades after the first Alaska oil well. It followed Richfield Oil’s discovery of the Swanson River oilfield on the Kenai Peninsula in 1957. At more than 213,000 acres, the Prudhoe Bay field was the largest oilfield in North America, surpassing the 140,000 acre East Texas oilfield discovery of October 1930.

Prudhoe Bay’s remote location prevented oil production beginning in earnest until 1977, after completion of the 800-mile Trans-Alaska Pipeline. The field’s production exceeded an average rate of one million barrels of oil a day by March 1978, according to the Alaska Oil and Gas Conservation Commission. It peaked in January 1987 at more than 1.6 million barrels of oil per day. A monument near the West Kern Oil Museum in Taft, California, marks the site of a 1910 gusher that flowed out of control for 18 months.

The Lakeview well in California’s Midway-Sunset oilfield erupted oil at dawn. The San Joaquin Valley had experienced a lot of gushers, including the Shamrock Gusher in 1896 and the 1909 Midway Gusher.

“But none of these wells came close to rivaling the Lakeview No. 1 which flowed, uncapped and untamed, at 18,000 barrels a day for 18 months in 1910 and 1911,” notes one San Joaquin Valley geologist.

The Lakeview No. 1 discovery, which became America’s most famous gusher after Spindletop Hill in 1901, was brought under control by October 1911. The “ram-type” blowout preventer to seal well pressure was invented in 1922.