This Week in Petroleum History, February 1 to February 7

For the first time, crude oil price quotations began to be based on specific gravity — the heaviness of a substance compared to that of water. In the new oil regions of Pennsylvania, independent producers frequently met to sell shares of stock, argue prices and enter into refining contracts that depended on the oil’s quality. Before the 1871 Titusville Oil Exchange, producers often gathered along Centre Street in Oil City, known as the “Curbside Exchange.”

In 1921, the American Petroleum Institute established API gravity, which would become the worldwide standard. Crude oil can be classified as light, medium, or heavy, according to its measured gravity. “By the middle of this summer you will be able to purchase at approximately 30,000 filling stations in various parts of the country, a fluid that will double the efficiency of your automobile, eliminate the troublesome motor knock, and give you 100 percent greater mileage,” Popular Science Monthly reported in 1924. The toxicity of tetra-ethyl lead resulted in its government-mandated phase out beginning in 1976. See Ethyl Anti-Knock Gas.

Angry refiners from Oil Creek, Pennsylvania, met in Petroleum Center and passed a resolution demanding an end to the “war tax” of one dollar per 42-gallon barrel of refined petroleum products, including kerosene. During the Civil War, Treasury Secretary Salmon P. Chase had advocated taxes as high as $10.50 per barrel. The one-dollar excise tax was imposed in 1864.

William F. “Buffalo Bill” Cody’s legacy extends beyond his world-famous Wild West Show, reaching into the Wyoming oil patch. Cody, who in 1896 founded the town that bears his name, in February 1910 bought 7,500 shares of Shoshone Oil Company. It was not his first attempt to strike oil.

In 1902, Cody and several partners, including Wyoming Rep. Frank Mondell, had begun exploring near Cody. They drilled one 500-foot dry hole and ran out of money when a second well also failed to find oil. W.F. “Buffalo Bill” Cody, center in black hat, and other investors at an oilfield on the Shoshone Anticline near Cody, Wyoming, around 1910. Photo courtesy the American Heritage Center, University of Wyoming.

In 1910 Cody and the congressman once again ventured into the oil business by forming Shoshone Oil. During a visit to New York City, “Buffalo Bill” carried pocket flasks of oil to interest investors. Some of his eastern friends started calling him, “Bill, the Oil King,” noted one historian, adding, “with what degree of seriousness we cannot know.”

Unfortunately for Shoshone Oil, the state’s major oil strikes came south of Cody, and the company’s drilling funds ran out. By the early 1920s, the Salt Creek oilfield would become one of the most productive in the country. Learn more in Buffalo Bill Shoshone Oil Company (also see First Wyoming Oil Wells).

Andrew J. Dalrymple — allegedly a frequent moonlight oil well shooter in the Tidioute, Pennsylvania area — was killed in a nitroglycerin explosion at his home on Dennis Run. The Titusville Morning Herald reported large amounts dangerous explosives had “lately been stolen from the various magazines throughout the country, and this species of theft is winked at by some parties, who are opposed to the Roberts torpedo patent.”

Today’s term moonlighting comes from the practice of surreptitious avoidance of licensing fees imposed on the use of Col. E.A.L. Roberts’ patented oil well fracturing method. Learn more in Shooters — A “Fracking” History.

The Department of Energy and Occidental Petroleum concluded the largest divestiture of federal property in the history of the U.S. government. The sale to the highest bidder of the Elk Hills Naval Petroleum Reserve in Kern County, California, got the federal government out of the business of producing oil and natural gas at Elk Hills, according to DOE. The $3.65 billion divestment completed a privatization process that had begun in 1995

“In May 1995 the Clinton Administration proposed placing the federally-owned Elk Hills Naval Petroleum Reserve on the market as part of its efforts to reduce the size of government and return inherently non-federal functions to the private sector,” explains the Office of Fossil Energy.

A small monument to the street lamp today stands at the corner of North Holliday Street and East Baltimore Street. Dedicated in 1997, the lamp is a replica of its original 1817 design. One year earlier, Baltimore artist Rembrandt Peale had hosted a gas lighting demonstration in his Holliday Street museum by burning the artificial gas – dazzling businessmen and socialites gathered there with a “ring beset with gems of light.” 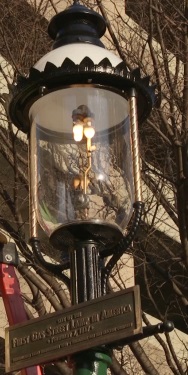 “During a candlelit period in American history, the forward-thinking Peale aimed to form a business around his gas light innovations, the exhibition targeting potential investors,” notes a historian at the utility Baltimore Gas & Electric (BG&E). The gamble worked, and several financiers aligned with Peale, forming The Gas Light Company of Baltimore.