This Week in Petroleum History, December 12 to December 18

“The available supply of gasoline, as is well known, is quite limited, and it behooves the farseeing men of the motor car industry to look for likely substitutes,” proclaimed the monthly journal Horseless Age. An early hybrid, this 1902 Porsche used a gas engine to generate electricity to power motors mounted on the front wheel hubs.

The magazine, first published in 1895, described early motor technologies, including the use of compressed air propulsion systems, electric cars, steam, and diesel power — as well as hybrids.

About the time of the first American auto show in late 1900, engineer Ferdinand Porsche introduced his gas-electric “Mixte” in Europe. The hybrid used a four-cylinder gasoline engine to generate electricity. The engine powered two three-horsepower electric motors mounted on the front wheel hubs. The car could achieve a top speed of 50 mph.

Independent producer George Strake Sr. completed the South Texas Development Company No. 1 well eight miles southeast of Conroe, Texas, where he had leased 8,500 acres. By the end of 1932 the oilfield was producing more than 65,000 of barrels of oil a day. But disaster struck in the Conroe field in 1933 when derricks and equipment collapsed into a burning crater of oil. The crisis would end thanks to slanted relief wells drilled by George Failing and his newly patented truck-mounted drilling method.

Learn more in Technology and the Conroe Crater.

Seeking oil investors, a Minnesota promoter proclaimed that dowsing with copper wires had located petroleum deposits in Nobles County, according to the Minneapolis Tribune, which reported the promoter had hired, “a Texas oilman and evangelist to lead a prayerful search for oil.” Despite no geological evidence, local investors paid $175,000 to drill a well that found no indication of oil or natural gas after reaching a depth of 1,500 feet. Minnesota is one of 17 states without any oil or natural gas production, according to the Independent Petroleum Association of America.

The Minnesota Geological Survey had reported in 1980 that of the state’s 17 exploratory wells drilled, “in suitable geologic settings,” none discovered commercial quantities of oil. The survey concluded, “the geologic conditions for significant deposits of oil and gas do not exist in Minnesota.”

“Oil fires, like battles, are fought by artillery” proclaimed an article in The Tech, a student newspaper of the Massachusetts Institute of Technology. “A Thunder-Storm in the Oil Country” featured the reporter’s firsthand account of the problem of lightning strikes in America’s oilfields. The MIT article not only reported on the fiery results of a lightning strike, but also the practice of using Civil War cannons to fight such conflagrations. Shooting a cannon ball into the base of a burning tank allowed oil to drain safely into a holding pit until the fire died out. “Small cannons throwing a three-inch solid shot are kept at various stations throughout the region for this purpose,” the article noted. Powered by natural gas, a three-horsepower engine drove belts in the Wright workshop.

The workshop included a single cylinder, three-horsepower natural gas-powered engine that drove an overhead shaft and belts that turned a lathe, drill press — and an early, rudimentary wind tunnel. Natural gas was piped from a field in Mercer County, about 50 miles northwest.

Learn about advances in high-octane aviation fuel in Flight of the Woolaroc.

Although traces of oil had been found as early as 1904 in Clay county, Texas, a 1910 gusher revealed an oilfield soon named after one of America’s earliest petroleum boomtowns, Petrolia, Pennsylvania. The well southeast of Wichita Falls produced 700 barrels of oil a day from a depth of 1,600 feet.

According to David Minor of the Texas State Historical Association (TSHA), annual oil production peaked in 1914 as discoveries at Electra and Burkburnett overshadowed the Petrolia field (see Pump Jack Capital of Texas). “Drilling continued, however, as the field turned out to hold the largest known reserve of natural gas in the state,” Minor explained, adding that gas pumped to nearby towns contained .1 percent helium.

“In 1915 the United States Army built the first helium extraction plant in the country at Petrolia, and for several years the field was the sole source of helium for the country,” Minor reported in the TSHA article “Petrolia Oilfield.”

The Ohio Oil Company completed a wildcat well in Venice, California, east of the Grand Canal on the Marina Peninsula, two blocks from the ocean. The discovery well initially produced 3,000 barrels of oil a day from a depth of 6,200 feet. Ohio Oil Company, which would become Marathon (see Marathon Oil of Ohio), had received a zoning variance permitting exploration within the city limits.

The Venice oilfield discovery launched another major California drilling boom just a few years after the world-famous discovery at Signal Hill. In the 1960s, artist JoAnn Cowans of Fullerton painted historic derrick scenes at Venice and Marina del Rey. She published a collection of her work in 2009 as Black Gold, the Artwork of JoAnn Cowans. 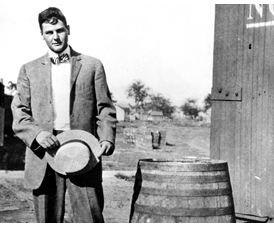 “H.L. Hunt bought the lease out ‘lock, stock and barrel,’ financing the deal with a first-of-its-kind agreement to make payments from future ‘down-the-hole’ production,” according to Hunt Energy. “The Bradford No. 3 turned out to be the discovery well of the great East Texas oilfield, which, at the time, was the greatest oilfield in the world.”

Hunt Oil moved its headquarters to Dallas in 1937 — and drilled the first Alabama oil well in 1944. The company entered offshore exploration in 1958 with leases in the Gulf of Mexico.